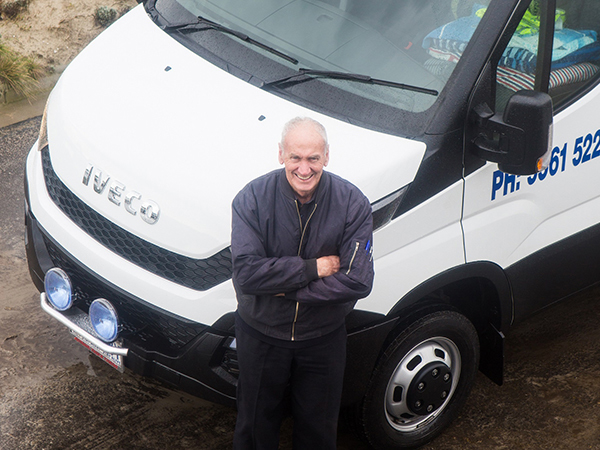 Running an independent freight operation from Warrnambool on Victoria’s west coast, with a nightly courier service to Melbourne, Whaler’s Freight needs a good return on investment from its fleet, as the road freight industry is an extremely competitive game.

“We wouldn’t normally keep the vans that long, probably replacing them every four to five years, but while they’re travelling well and economic conditions are a bit tight, you tend to hang on to the vehicles a bit longer,” Les said.

Having owned Whaler’s Freight with wife Julie for 33 years, and had all of their five children involved in the business at some point, the couple know that efficiency is important in any business.

The release of Iveco’s new 19.6 m³ 50C van (the largest volume capacity of any van available in Australia) provided the opportunity for increased load space, resulting in less need to tow a box trailer.

“The previous Daily we ran taking air freight on the Warrnambool to Tullamarine run was 17 m³, so the new one has a bit more carrying capacity,” Les said.

“The extra space has been a real benefit for us.  Not having the trailer obviously is better on fuel use – this can add up on the 590 kilometre return trip.  It’s also an easier and faster journey without the trailer,” Les said.

Whaler’s Freight’s latest Daily is the third that has earned its keep on the Warrnambool to Tullamarine route, and is one of five Ivecos in the company’s fleet, which also includes several utes and trucks.
The latest van is fitted with a 3-litre turbodiesel engine with intercooler producing 125 kW and 420 Nm of torque from a low 1500-2600 rpm.  Despite the impressive power and torque output, on average the new Daily range uses 4.1 per cent less fuel than the model it replaces.

The model’s standard equipment list is healthy, particularly the safety features, which include front and rear disc brakes (ventilated front) with ABS, ESC, Hill Holder and four airbags. These outstanding features have assisted the new Daily in being crowned ‘2015 International Van of the Year’.

Les is also impressed that the latest generation Daily has maintained its tough ladder-style chassis.

“Another benefit of the Daily compared to others in the market is that it’s constructed on a solid steel chassis, this gives it real strength – it’s a solid van all-right,” he said.

“The new one has already clocked up over 18,000 kilometres in a short time and is performing very well.  I’ve got five Ivecos and they’ve all given us a good run, I’d have no hesitation in recommending a Daily to others – our driver Peter also loves it.”


Iveco
Iveco Australia manufactures and imports commercial vehicles spanning the light, medium and heavy duty truck segments and, under the Iveco Bus brand, buses and coaches. The commercial vehicle range includes on and off-road models beginning with car licence vans, through to road train prime movers rated at up to 140 tonnes GCM. The Acco and Powerstar vehicles, developed and produced specifically for the Australian market, complement Iveco’s worldwide best sellers such as the Daily, Eurocargo, Trakker and Stralis. Iveco vehicles are ably supported by a dedicated network of 46 dealerships and service outlets strategically located nationwide, offering aftersales services that include extended warranties, roadside assistance and programmed maintenance contracts.
Iveco’s Australian manufacturing base in Dandenong Victoria, represents a major investment in the local truck and bus industry. Iveco directly employs more than 600 people nationwide and thousands more Australians in related industries, from retailing operations to component suppliers.
Iveco is a brand of CNH Industrial N.V., a World leader in Capital Goods listed on the New York Stock Exchange (NYSE: CNHI) and on the Mercato Telematico Azionario of the Borsa Italiana (MI: CNHI). Iveco designs, manufactures and markets a wide range of light, medium and heavy commercial vehicles, off-road trucks, and vehicles for applications such as off-road missions.
Iveco employs close to 21,000 individuals globally. It manages production sites in seven countries throughout Europe, Asia, Africa, Oceania and Latin America where it produces vehicles featuring the latest advanced technologies. 4,200 sales and service outlets in over 160 countries guarantee technical support wherever an Iveco vehicle is at work.