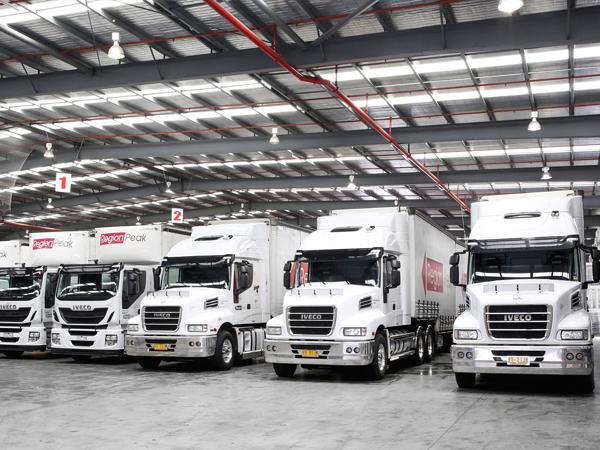 One doesn’t normally get involved in the transport industry to stay clean given it’s a gritty and hugely competitive sector, but for Region Peak Distribution owner and director, Brian Harper, a truck cabin was a more attractive environment than the workshop where he plied his trade as an ‘A’ grade welder.

“My father was in the transport industry for upwards of 40 years, and I used to see that he’d come home clean and I would get home filthy every night,” Brian said.

It wasn’t too long afterwards that he made the career change, swapping the Mig and Tig welders for his first rigid truck and a local PUD route around Melbourne.

Twenty-seven years on, it’s proven to be a sound business move with Region Peak now firmly entrenched as a solid and highly reputable medium sized fleet operation, offering a combination of line-hall, PUD and warehousing and logistics solutions to its growing customer base.

Headquartered in the Melbourne suburb of Somerton and with depots in Sydney, Brisbane and Adelaide, Region Peak now has close to 70 direct employees on the payroll plus over 20 more subcontractors.  According to Brian the growth of the business has been organic.

“I still work for the same customers today that I did 27 years ago – as their businesses have grown, I’ve grown with them,” he said.

And so has Region Peak’s truck fleet which is strongly represented by Ivecos including Eurocargos, Stralis and Powerstar 7200 variants – the Powerstars make up nine of the 18 Iveco models on fleet and are a great package, according to Brian.

“As far as product is concerned, Iveco has some of the best available in Australia,” Brian said.

“The Powerstars provide the proven performance of an American drivetrain, which is strong and easy to service no matter where in Australia you are. They also have the creature comforts that drivers like.

“I’ve got drivers hopping out of North American trucks to get into Ivecos.  And it’s not “do I have to?” it’s “when do I get one?” That’s a big call and endorsement from the drivers.”

Coupled to 34 pallet tautliner B-Double trailers, the Powerstars service the eastern seaboard and Adelaide on a regular basis, with an overnight service into these areas also offered for the timely distribution of sensitive palletised freight.  All Region Peak depots meet food grade requirements along with the fleet adhering to food quality transit standards.

The Powerstars feature a Cummins 15 litre engine producing 550 hp and 2500 Nm and are equipped with a combination of 18-speed manual and ZF’s EuroTronic 16-speed AMT transmissions.

Continuing the predominantly North American driveline flavour is Hendrickson Primaax rear suspension and Meritor axles.  It’s a combination that is successfully seeing the Powerstars rack-up 300,000 kilometres per year without incident.

“They are also very good on fuel.  I’ve noticed a difference in fuel use with the Ivecos – fuel is a large expense in running a transport fleet.  The other day on a return trip from Melbourne to Sydney we got 2.8 kilometres per litre from one of the B-Double Powerstars.”

Of the rigid Ivecos on fleet, Region Peak have opted for a combination of Eurocargo ML225s and Stralis ATi 360s with 14 pallet bodies.  Brian said these smaller Ivecos are also well liked by the drivers.

“The boys love the Stralis and Eurocargo models, one of the Eurocargos is on a permanent contract and without fail that driver washes it every day, that’s how proud and happy he is with it – the drivers treat the trucks as if they were their own,” Brian said

Despite the transport sector feeling the squeeze in recent years due to the patchy economic conditions and major competition from a handful of industry giants, Brian is still forecasting solid growth for the company in the coming years.

“We think it’s possible to grow the business by around 15 per cent year on year,” he said.

“We’ll add a truck to the fleet each year and renew two; eventually we’ll aim to add two new vehicles per year and I’m happy for these to be Ivecos.”