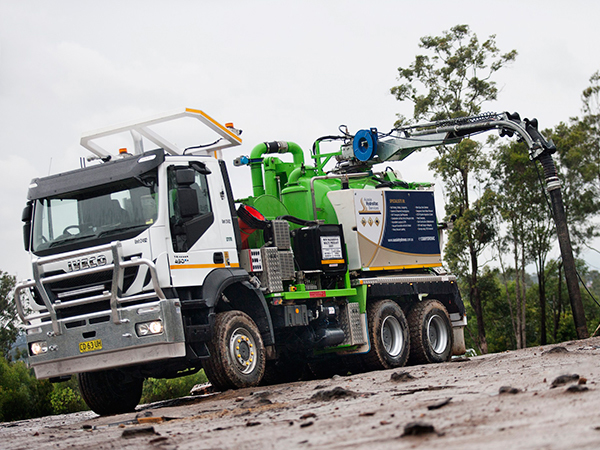 This brawn and brains approach is delivering Aussie Hydrovac and its clients – especially those in remote locations – many efficiencies, allowing the company to deliver faster and more cost-effective services.

Based in Brisbane but often travelling hundreds of kilometres inland to areas such as Roma and Longreach servicing mining and capital works clients, the Trakkers have become a favourite for Aussie Hydrovac and its drivers according to General Manager, Adam Morris.

“The units have been working around the Surat Basin region, conditions are rough there – we’re dropping in and out of creek beds, gullies and some fairly rough easements,” Adam said.

“Prior to commissioning the Trakkers, we were trying to access these sites with road-going vehicles and they would often get damaged because of lack of clearance, particularly at the front and rear. So to give the vehicles access we’d need to grade haul roads and this would obviously increase costs.”

Once on site the vehicles are used to carefully unearth underground assets, including pipes and cabling that would be too risky to uncover with conventional earthmoving equipment.

To help locate the assets, the vehicles also feature electro-magnetic detectors and the back-up support of ground-penetrating radar units.  This equipment alerts the operators to the correct zone and alignment of the existing underground assets, so as to pinpoint the vacuum excavating works.

The current bodies are of Aussie Hydrovac’s own design, developed in-house using Adam’s 16-plus years of industry knowledge.

“The first of these bodies that came to Australia were from Europe,” Adam said.

“While they were fine for city work, we found that they just didn’t cope in some of Australia’s tougher conditions – components were cracking and welds were falling apart so we began developing our own units and deigned them to meet Australian requirements.”

“The bodies work really well.  Such is the demand for our services that in the last two years we’ve gone from having four trucks on the road to 22, and now that we’ve come across the Iveco Trakkers I can only see operations getting bigger.”

Adam said that despite being dubbed ‘Hulk 1’ and ‘Hulk 2’ courtesy of their large size and road presence, that the vehicles were surprisingly civilised to drive on-road.

“The Trakkers are just absolute gems and the drivers love them, comparing their on-road manners to standard trucks of similar size – for a 6x6 with high ground clearance that’s a real compliment,” Adam said.

“With the 450 horsepower engine and the ZF automated manual transmission, by all accounts the vehicles are easy to drive and very comfortable; these are important consideration when you’re driving up to 1,000 kilometres per day.”

With the Trakkers performing faultlessly since entering service several months ago, plans are well underway to introduce additional trucks as well as Iveco Astras to the fleet mix.

“The Astras are an interesting proposition and the 8x8 configuration will be better for weight distribution with the bodies we’re using,” Adam said.

“The specification looks right so I’d say it’s just a matter of time – we could be adding a further 10 Iveco vehicles to the fleet in the short to medium term.”

Although the pending arrival of Astras to Aussie Hydrovac Services’ fleet will no doubt further strengthen the company’s already impressive capabilities, it will provide the team with somewhat of a quandary: with ‘Hulk’ taken, what will they call the significantly larger Astras?

Iveco Australia
Iveco Australia manufactures and imports commercial vehicles spanning the light, medium and heavy duty truck segments and, under the Iveco Bus brand, buses and coaches. The commercial vehicle range includes on and off-road models beginning with car licence vans, through to road train prime movers rated at up to 140 tonnes GCM. The Acco and Powerstar vehicles, developed and produced specifically for the Australian market, complement Iveco’s worldwide best sellers such as the Daily, Eurocargo, Trakker and Stralis. Iveco vehicles are ably supported by a dedicated network of 50 dealerships and service outlets strategically located nationwide, offering aftersales services that include extended warranties, roadside assistance and programmed maintenance contracts.

Iveco is a brand of CNH Industrial N.V., a World leader in Capital Goods listed on the New York Stock Exchange (NYSE: CNHI) and on the Mercato Telematico Azionario of the Borsa Italiana (MI: CNHI). Iveco designs, manufactures and markets a wide range of light, medium and heavy commercial vehicles, off-road trucks, and vehicles for applications such as off-road missions.

Iveco employs close to 21,000 individuals globally. It manages production sites in seven countries throughout Europe, Asia, Africa, Oceania and Latin America where it produces vehicles featuring the latest advanced technologies. 4,200 sales and service outlets in over 160 countries guarantee technical support wherever an Iveco vehicle is at work.

Iveco employs close to 21,000 individuals globally. It manages production sites in 7 countries throughout Europe, Asia, Africa, Oceania and Latin America where it produces vehicles featuring the latest advanced technologies. 4,200 sales and service outlets in over 160 countries guarantee technical support wherever an Iveco vehicle is at work.