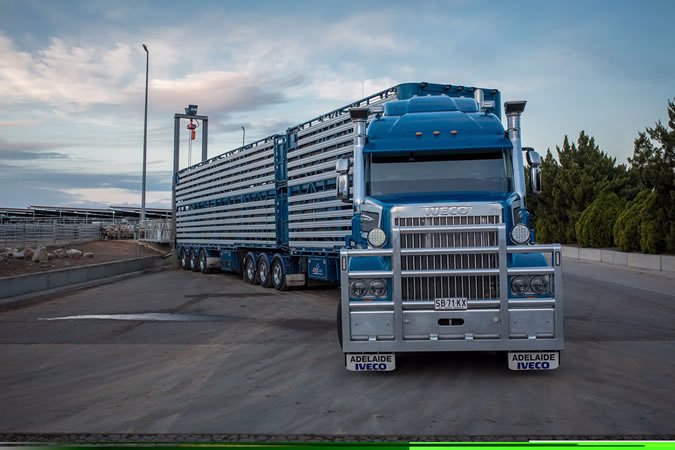 Leading South Australian livestock carrier, Trans Australian Livestock, is the latest transport company to put Iveco’s flagship Powerstar 7800 to work in a demanding livestock application, where it is quickly finding favour with drivers along with company Operations Manager, Jason Thornhill.

While principal driver, Graeme, is pleased to have a comfortable and roomy cabin to call home, Jason’s interest in the truck’s performance is a little broader, with obvious importance given to the vehicle’s reliability and overall running costs.

It’s a family business, with Jason’s parents Gary and Suzette and brothers Damian and Wade also involved in running the company and managing the fleet of 50 prime movers and trailer stock.

The Powerstar 7800 is the third Iveco on fleet with the performance of an earlier Powerstar 7200 impressing Jason enough to give the 7800 a shot – now having covered over 100,000 kilometres in only a few short months, the decision has proven to be a sound one.

Operating the fleet from its Lucindale base, Trans Australian Livestock carries sheep and cattle to abattoirs in South Australia, New South Wales and Queensland and to feedlots and sales yards even further afield.  The trucks are normally configured as B-Doubles grossing 68.5 tonnes, but if a third trailer is needed the Powerstar 7800’s 140 tonne GCM easily has it covered.

Jason says that travelling these large distances over questionable roads at times, the Powerstar needs to be comfortable but also durable, and that thanks to its combination of premium American driveline and European-style cabin interior, both these requirements are sorted.

“Our driver Graeme can be on the road for six days per week, so he appreciates the Iveco’s well-appointed cabin and the extra space you get compared to some of the other trucks, he really loves it,” Jason said.

“I like the fact that underneath it has Cummins power, an Eaton Roadranger transmission and other American componentry – it’s reliable and easy-to-service.  We have five mechanics on staff and do all our own servicing, having a common drivetrain provides us with a lot of efficiency when it comes to servicing and maintenance.”

Developed and engineered in Melbourne specifically for the Australian market, the Powerstar 7800 is available with a number of engine options up to 600hp, but Trans Australia’s truck is specified with the 15-litre Cummins ISX good for 550hp and 2508Nm of torque.

Despite the powerplant being an EGR unit, Iveco developed a market-leading local cooling package for the engine, designed to keep it running nicely even when the mercury hits well into the 40s.

“I had no concerns with going for the EGR engine having full confidence in Iveco and Cummins coming up with a specification that would work well, so far the performance has been strong and there’s been no problems at all,” Jason said.

“I’m also very pleased with the fuel figures that the Powerstar is returning, it’s hovering at about 1.4 to 1.5 kilometres per litre, hauling two full trailers – that’s an excellent outcome.  Although diesel is at the moment the cheapest it’s been in a while, it’s still important to minimise fuel costs as much as possible.”

Jason says that he’s an advocate of the Powerstar and is often asked by other operators about the Iveco’s performance.

“It’s a good looking truck and when people see it they always ask how it goes and what it’s like, and I’m happy to tell them about my positive experience with it,” he said.

According to Jason, Trans Australian Livestock is experiencing steady growth, with three trucks added to the fleet this year alone, but he notes that conditions in the bush for farmers was still generally tough.

“Currently it’s one of those bitter-sweet situations for farmers, cattle and sheep prices are the highest they’ve been in some time, but there’s not been much rain in the last three or four years, so they don’t have high livestock levels to take advantage of the strong prices,” he said.

“A carrier such as us is fortunate in that there is always livestock that needs to be moved whether to abattoirs, sales yards or around the feedlots.”

Jason says that the strong performance of the Powerstar along with the excellent service and relationship with the selling dealership, Adelaide Iveco, has seen the company order a second 7800.

“The truck is performing well and the follow-up and support from the team at Adelaide Iveco is outstanding.  If there are any issues or concerns, they’re quick to deal with it and they’re a great bunch of guys to deal with, this has given us the confidence to order a second 7800.”