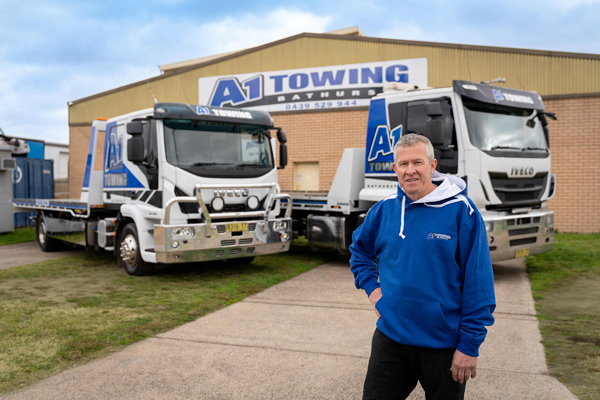 When A1 Towing was looking for a new medium-duty dual cab truck to join its towing fleet, it chose a European-made vehicle – the IVECO Eurocargo ML140 – rather than one of the more common Japanese models.

A1 Towing is Bathurst’s largest towing and specialised transport provider. Though it concentrates most of its efforts around Bathurst, Orange and the Central West, the business also works further afield, including in larger metropolitan centres and interstate.

Apart from towing of all types of vehicles and motorcycles, the company also offers breakdown pickups, as well as a forklift hire service, and container sales and hire.

As Grant – who has been at the helm of the business since it was established in 2004 –explained, A1 Towing is driven by a commitment to top rate service, efficiency and reliability.

“As a family business, we take pride in everything we do. It doesn’t matter if it is a special heavy load project you need handled or an urgent breakdown pickup. Our team has the experience and equipment to get the job done,” he said.

This equipment includes a fleet of nine vehicles, three of which carry the IVECO badge.

Its latest addition was a Eurocargo ML140 dual cab. The truck is fitted with a customised body manufactured by Hervey Bay-based, Bozmac Tilt Tray Specialists, and is equipped with a number of custom features including stainless steel infill panels and a 9-tonne towbar/cradle assemble.

Bozmac also fitted an additional under slung rear carrier, along with airbrakes and hydraulics, to the back of the truck. This can be extended to tow another vehicle, such as a caravan or boat, which is very useful. On top of that, a towball hitch is standard.

One of Europe’s best-selling medium-duty trucks, the ML140 is becoming more and more popular here in Australia, and being a dual cab it provides the extra space and comfort to carry additional passengers away from the scene of a break down or accident.

Even so, as Grant explained, Japanese trucks appear to be the most popular for local tow truck market. So why did A1 Towing ignore the crowd and choose a European truck?

“There were several factors behind our decision to go with the Eurocargo ML140, including reduced maintenance requirements and extra comfort. That last point is particularly important for a business like ours, which can undertake long haul work,” Grant said.

“The 5175 mm wheelbase dual cab we chose covers this requirement nicely. The extra level of comfort just makes things easier all-round for our drivers. As a business owner, I see it as one of several factors that help ensure they get the job done safely and efficiently.”

“The Eurocargo gives us more power than similar vehicles I’ve used in the past,” Grant said.

“The other feature we chose, which the Japanese trucks in this class don’t have, is the rear diff lock. We need to get off-road a fair bit, on farms and things like that and the rear diff gives us the extra traction we need for this type of work.

“We have two Stralis trucks in our fleet as well and, in general, I would say that the IVECO vehicles handle the heavy-duty stuff really well. That’s important in Australia, considering some of the harsh conditions we come up against.”

While the ML140 is available with several transmission options, A1 Towing chose a fully automatic gearbox. The Allison S3000 5 speed transmission is easy and stress-free to operate and, according to Grant, his drivers are also very happy with the choice. “They love the truck. They fight each other to get to drive it,” he said.

Concluding, Grant had nothing but praise for the team at IVECO Brisbane who sold him the Eurocargo ML140.

“The service I received was first rate. They met me at the airport and did everything they could to help me in any way I needed. No question was too difficult, and no effort was spared. I would definitely recommend IVECO Brisbane as a really professional outfit,” he said.