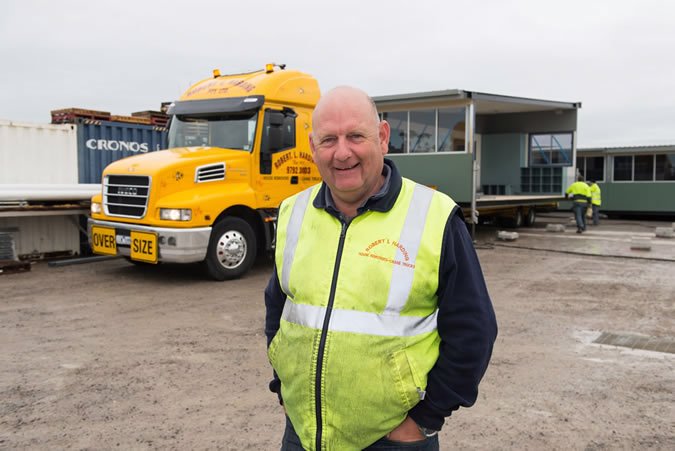 Anyone who’s moved house knows how time consuming and what a hassle a move can be, but spare a thought for the companies involved in regularly moving houses – not the contents, the houses themselves.

Amazingly though, for Melbourne transportable building and house relocation specialists, ‘Robert L Harding’, the most difficult job is not jacking and loading the buildings on to the drop deck trailers, nor negotiating narrow streets with loads that can be up to five metres in width…

According to Robert L Harding Director, Jonathan Harding, the most difficult part of relocating buildings, particularly interstate, is juggling permits and meeting all the requirements of the National Heavy Vehicle Regulator (NHVR); this can take up to six weeks.

“The modern machinery and tools we use these days make the moves relatively straight forward,” Jonathan said.

“Sure we need to take precautions, inspect the drive routes prior to the move to ensure clearances but with this prior planning comes the knowledge that everything will run smoothly.”

The Dailys, fitted with tray bodies and finished in the company’s bright yellow livery, act as escort vehicles alerting other road users of the oversize dimensions of the prime mover, along with carrying important tools such as the hydraulic plant and jacks, along with timber blocks and other associated gear.

Jonathan says that the two Dailys replaced Japanese models and are providing his business with a number of improvements and benefits.

“Being car licence models is good in that we can be a little more flexible in who we can hire to drive them – we can start new team members off in the Dailys and gradually train them up so that eventually they’re driving the heavier trucks,” Jonathan said.

“With their lighter tare weight, the Dailys give us a greater payload than what we had previously, they’re always up at their maximum GVM (4,495kg) and the boys just love them because they’re so comfortable and easy-to-drive.”

Building relocation is in Jonathan’s veins being a third generation family member of the business that was started by his Grandfather Robert, in 1935.

Jonathan recalls spending school holidays at a young age going to work with dad Trevor, helping him out on site and generally just enjoying their time together out in the trucks.

More recently the tables were turned and it was Trevor who was riding shotgun with Jonathan on a trip from Melbourne to Benalla in the new Iveco Powerstar 6400.

“Dad just couldn’t believe how easy the trip was, how quiet and comfortable the truck was, how smoothly it drove and how effortless the whole exercise was,” Jonathan said.

Despite there being much higher power ratings available in the Powerstar range, Jonathan’s decision to go with the 450hp output (the same as in his Stralis ATi) was a case of ‘horses for courses’.

“We’re doing a lot of work these days for high-end, pre-fabricated modular home builders – some of these houses are worth well over a million dollars and have some rooms that are fully tiled and with fitted shower screens,” Jonathan said.

“Our approach is to have sufficient horsepower for the job, we’re not racing and the safety and the integrity of the load is paramount. If there’s too much power the temptation is there to use it and this can shake up the load and damage it.

“Typically we’re not moving really heavy loads, usually not heavier than 15 tonne, they’re just bulky – pushing into the wind is the biggest consideration but 450hp will get the job done.”

One area of the Powerstar’s performance where Jonathan is particularly impressed is fuel consumption.

“The Powerstar is great on fuel, it’s using almost half the fuel of some of our other non-Iveco trucks,” he said, “even the drivers are noticing how efficient it is.

Jonathan is also rapt at the performance of the ATi, particularly its manoeuvrability and ease of use.

“The Stralis is particularly good in the built-up areas where its impressive turning circle allows us to better negotiate tighter streets, the automated transmission also lets the driver concentrate on moving the wide loads and not have to worry about changing gears,” he said.

“At the end of the day, our trucks are a tool of the trade helping us to get the products from ‘A’ to ‘B’ and I’m really happy with the Ivecos.

“The service and support we receive from Darren Cann and the team at Melbourne Truck Centre is outstanding, nothing is too much trouble for them.”