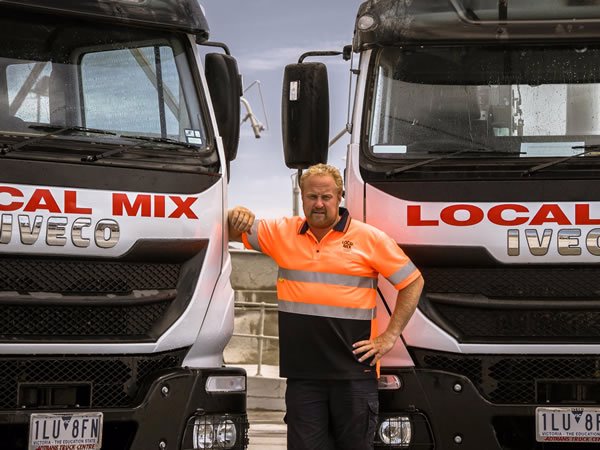 When Trev Richardson began Local Mix in the early 1970s, it was an ACCO agitator that got the business started, some 45 years later, son Stuart, has just welcomed two new 8x4 ACCOs to the fleet – ACCOs run in the blood it would seem.

That first ACCO ‘Butterbox’ might now sit quietly in the equipment graveyard at the rear of the company’s Moolap, Geelong facility, but such is Local Mix’s passion for the ACCO nameplate that it was never scrapped, just left to gain patina and be a reminder to the business’ early days.

Nostalgia won’t pay the bills though, so for Stuart who is now charged with the day to day running of Local Mix’s batching plant, it’s important that all his trucks serve a purpose and are reliable as possible.

The majority of the company’s 32 agitators are ACCOs in both 8x4 and 6x4 configuration – there are 20 on fleet – a Powerstar is also used in tipper and dog applications.

“We tend to keep our trucks for a long time, we look after them well and get an excellent run from them,” Stuart said.

“There’s still a 1997 model ACCO in service and not that long ago we retired a 1993 model – the ACCOs are really built to last.”

Experiencing steady growth in recent years on the back of strong residential and commercial building activity in the greater Geelong region, Local Mix has been growing its fleet by two or three trucks per year, and the company is now the largest concrete supplier in the city.

Stuart said that there are many reasons why IVECO keeps getting Local Mix’s agitator business, year in, year out.

“It’s hard to go past the ACCO for agitator work, it’s a fit for purpose truck,” he said.

“They’re tough, simple to maintain, easy to keep clean inside and out, manoeuvrable and have the tare weight we need.

“The drivers like them as well because they’re easy to drive with the auto transmission, they’re lower to the ground so that makes it easy for them to get in and out of and with the airbag suspension they’re also comfortable. Electronic stability control also makes them safer to handle on the roads.

“They’re not fancy, they’re not covered in chrome but are well equipped where it matters.”

The two new trucks feature 8 cubic metre bowls and are providing the extra capacity to help Local Mix on the bigger projects that the company is increasingly undertaking.

“We can do anything from smaller residential jobs to larger commercial projects,” he said.

“A couple of years ago we were involved in the build of the new Epworth Hospital, which required 25,000 cubic metres of concrete – it was the largest infrastructure project in Geelong for many years.

“Aside from two concrete facilities we also operate a bluestone quarry and a sand and pebble quarry, which is where the tippers come in.”

Another important factor in Local Mix selecting IVECO ACCOs over many years is that the trucks are manufactured in Australia.

“Local Mix is a local Australian company, we employ over 70 people full-time across all our sites,” Stuart said.

“Both Trev and I have a firm belief that it’s important to support local manufacturing and Australian jobs, it’s something we’re proud of.

“Our Dealer Adtrans and IVECO as a company has also been excellent to deal with over the years. On the rare occasion that there’s been an issue, it’s been sorted out very quickly for us.

“Over the years we’ve owned around 30 ACCOs and we’ll be buying them for many years to come.”