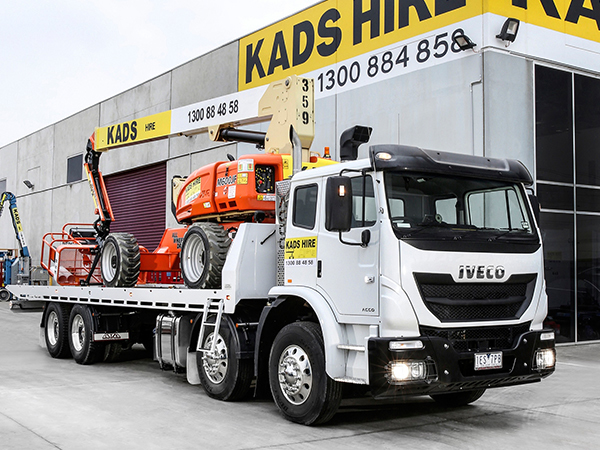 Buoyed by the dependability of two previous ACCO models, a Melbourne-based plant hire company has added a new 8x4 twin steer tilt tray to its Iveco fleet, using it to deliver machines to work sites all over Melbourne.

According to Melbourne’s KADS Plant Hire company owner, Don Emtsis, in any crowded marketplace it’s essential to stand out from competitors, and in the case of his company, it comes down to personal service and reliable delivery of equipment.

Having spent many years working on the other side of the fence in construction, Don experienced first-hand the problems in sourcing a reliable plant hire service.

“I’d worked in construction all my life and the number of times I’d hear my supervisors say ‘I ordered that machine two days ago and it’s still not here,’ so I saw an opening,” Don said.

“I thought I’d just buy half a dozen machines and continue working, but demand grew and grew.  Now we have around 370 units with 50 or 60 more units on the way.”

After initially operating the company on a part-time basis, Don fully dedicating himself to KADS in 2003 and hasn’t looked back.  The company now employs a team of 12 including several family members, operating from a large facility in North Laverton, with a second outlet recently opened in nearby Sunshine.  Despite its locations being concentrated in western Melbourne, the company’s reach is far greater thanks to agreements with other plant hire providers.

“My customer might need a machine that I don’t have, but I can organise it for them through one of the other providers and vice versa,” he said.

“I firmly believe that KADS’ growth has been due to our high customer service levels and our punctuality – with our clients you’re just not a number, we know them on a first name basis.

“If they have a problem or need something they can ring me up and we’ll make it happen, even if it’s at two or three in the morning.  If you have good service and punctuality, you’ll never go wrong.”
To ensure punctuality it’s essential that the company keep several vehicles on site for smooth delivery to its 1000 plus customers.

To drop off and pick up smaller machines, KADS uses utes and trailers, but for heavier equipment it relies on an Iveco Eurocargo tray truck with beavertail, and a recently-purchased ACCO 8x4 twin steer fitted with tilt tray and winch.

The new ACCO features the top-spec 8.9 litre Cummins engine outputting a strong 254kW (340hp) and 1500Nm (1106lb/ft) along with Allison 6-speed full automatic transmission – the combination provides a truck with plenty of torque that’s a pleasure to drive on Melbourne’s congested streets.

For added comfort the ACCO uses Hendrickson airbag suspension on both front and rear axle pairs, but aside from the comfort factor, the airbags allow the truck to be lowered which is particularly handy for loading and unloading equipment.

Throughout his many years in construction and owning businesses, Don has driven and purchased quite a selection of trucks of various makes and models, but it’s the ACCOs that he’s most fond of.

Prior to acquiring the 2015 model 8x4, the business used a 2007 ACCO crane truck, and before that Don also enjoyed excellent service from an even older International ACCO.

“I reckon the ACCOs are pretty much one of the best trucks you can get,” Don said.

“The International ACCO was always my favourite – it did everything I asked of it and didn’t cost me anything to run.  The 2007 model was also good, we went for an automatic transmission so it was easy and comfortable for the drivers to use.

“Going for the twin steer in the latest model allows us to load and unload the machines more easily and efficiently, it doesn’t matter which way the machines are facing – you’re not limited to where you can put your weight.

“The new one’s a lot nicer than the 2007 model and our driver Ross is proud as punch with the thing.”

Both Ivecos are on the road from 6:00am to 4:00pm most days, delivering equipment around Melbourne and further afield with great reliability.

“The ACCOs have never given me any grief just the normal wear and tear stuff – no breakdowns,” Don said.

Iveco
Iveco Australia manufactures and imports commercial vehicles spanning the light, medium and heavy duty truck segments and, under the Iveco Bus brand, buses and coaches. The commercial vehicle range includes on and off-road models beginning with car licence vans, through to road train prime movers rated at up to 140 tonnes GCM. The Acco and Powerstar vehicles, developed and produced specifically for the Australian market, complement Iveco’s worldwide best sellers such as the Daily, Eurocargo, Trakker and Stralis. Iveco vehicles are ably supported by a dedicated network of 50 dealerships and service outlets strategically located nationwide, offering aftersales services that include extended warranties, roadside assistance and programmed maintenance contracts.

Iveco is a brand of CNH Industrial N.V., a World leader in Capital Goods listed on the New York Stock Exchange (NYSE: CNHI) and on the Mercato Telematico Azionario of the Borsa Italiana (MI: CNHI). Iveco designs, manufactures and markets a wide range of light, medium and heavy commercial vehicles, off-road trucks, and vehicles for applications such as off-road missions.

Iveco employs close to 21,000 individuals globally. It manages production sites in seven countries throughout Europe, Asia, Africa, Oceania and Latin America where it produces vehicles featuring the latest advanced technologies. 4,200 sales and service outlets in over 160 countries guarantee technical support wherever an Iveco vehicle is at work.