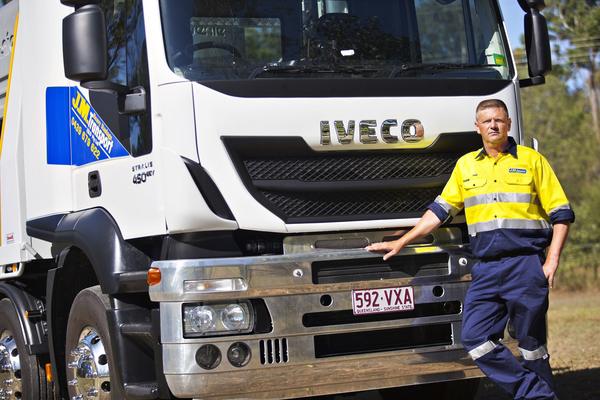 After 14 years of successfully operating front-lift waste compactors based on Iveco’s proven ACCO 8x4 cab chassis, late last year JM Transport proprietor, Paul Chaffey decided the time was right to diversify the business model. With an ear to the ground and his many contacts in the greater Brisbane area, Paul had heard whispers that there were some opportunities in heavy haulage, particularly transporting plant and construction equipment. Keen to test the waters, Paul had the compactor body removed from one of his 2350G ACCOs and he promptly fitted a South East Queensland Tilt Tray ‘Strongback’ body. Putting the older ACCO to work was a sensible way of entering the heavy haulage fold without overcommitting and incurring high start-up costs associated with new capital equipment, but what happened in the following few months was totally unforeseen, according to Paul.

“The heavy haulage business really took off, to the point that we were needing to add another truck, and fast,” Paul said. “The Iveco trucks are great vehicles and have given me a good run over the years, so the brand was at the top of my shopping list, but that’s not to say I didn’t have a look at what else was out there. I considered other European alternatives as well as Japanese, before settling on the Stralis 8x4 AD, plus I’d heard good reports about the Stralis from some other operators.”

In fitting the vehicle’s body, Paul again turned to South East Queensland Tilt Tray, who commissioned an 8.3 metre tray and 30,000lb winch combination allowing Paul to carry loads of up to 15 tonnes.  All other aspects of the truck remain totally stock and unmodified.
The Stralis features an Iveco Cursor 13 engine producing 450hp / 336 kW of power and 2,200Nm of torque from a low 1,000 rpm.  Paul says that while the engine has plenty of poke, the fuel economy is also impressive.

“With the 450hp, the truck has more than enough power for the sort of work we’re doing and it’s also very efficient,” he said. “Combined with the 16-speed AMT and an extremely comfortable cabin, it’s just a great truck to drive and is providing us the scope to tackle jobs further away from our Jimboomba base than we normally would. Driving such a comfortable truck, you don’t mind going a bit further."

Despite JM Transport Heavy Haulage largely focussing on transportation of construction, plant equipment and related, the team is happy to also take care of container work and other more varied loads.
It’s this can-do attitude and a high level of customer service that now has Paul just about ready to add yet another Iveco tilt tray to the fleet.

“We’re a small family business and this gives us the opportunity to provide a more personalised service to our customers,” Paul said. “I think that a high emphasis on customer service is what sets us apart from many other operators, we’re often called on to move equipment at short notice because others haven’t been able to honour their commitments. We’ll move heaven and earth to get the job done for our clients, and using good reliable trucks like Iveco make all the hard work just that little bit easier for us.”