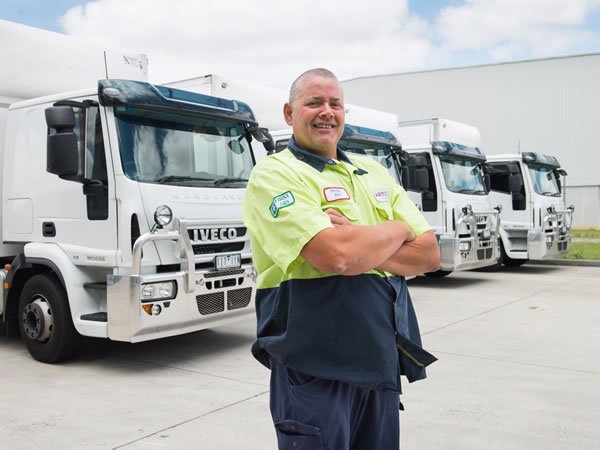 The third largest baking company in the World, ARYZTA, relies on a fleet of eight Eurocargo ML160 models to ensure safe and timely transport of their perishable food products across Victoria.

ARYZTA bakes locally from facilities in Melbourne and Sydney and counts supermarket chains along with McDonald’s as major clients. Baking aside, transporting the perishable food products to consumers in a safe and timely manner to ensure optimal freshness, is as important as the cooking itself.

ARYTZA Victorian Distribution Manager, Peter Roy, has a long association with IVECO, moving the fleet away from being Japanese truck-based a few years ago, to one that’s now exclusively Eurocargo.

“The Eurocargo models are a ‘comfort’ truck, the drivers enjoy using them and basically they’re like driving a big car,” Peter said.

“Most of our drivers have been with us for many years and remember the older trucks we used to operate – they’re very grateful to now have the Eurocargos.”

Operating from Dandenong South in Melbourne, the Eurocargos deliver the fresh produce on a daily basis to outlets all around Victoria. Goods are also transported frozen via line-haul to other states while a similar distribution model is also employed at the company’s Warwick Farm, Sydney facility.

All vehicles feature pantech bodies with a tailgate lifter to facilitate easier unloading of produce when delivering. To allow more efficient loading while still on site at the bakery, the Eurocargos are specified with rear Electronically-Controlled Air Suspension (ECAS), which provides better alignment of the body with the loading dock, while also delivering a smoother ride.

For greater protection against animal strikes on regional and country roads, the trucks are equipped with alloy bullbars.

Peter said that the latest Eurocargos were purchased following the strong performance of previous IVECO models on fleet.

“This is the second time that we’ve renewed the fleet with Eurocargos,” he said.

“We normally keep the trucks for around five years and over this time they’ll cover over 500,000 kilometres.

“We’ve found the trucks to be good on fuel, this is the major cost in operating a fleet so the more savings you can make in this area the better.

“They also look smart on the road, are very manoeuvrable in the urban environment and have high driver acceptance. And through CNH Industrial Capital (IVECO’s in-house financier), we were able to get some attractive leasing rates.”

“Melbourne Truck Centre have been great to deal over many years, both in the purchase and servicing of our trucks, nothing is too much trouble for them.”