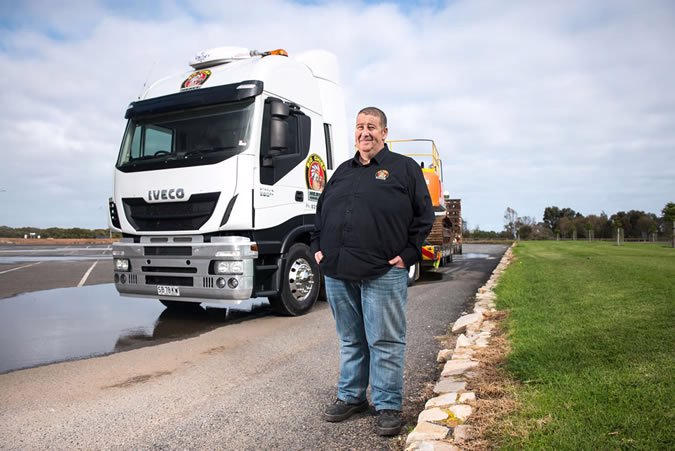 A new Iveco Stralis AS-L prime mover has joined the tribe at ‘Big Chief Heavy Haulage’ in Adelaide, to assist in carting a host of mining, civil and domestic equipment for the steadily-growing business.

The Stralis adds to the company’s three existing Ivecos, a Powerstar 7200 and two other Stralis models – together they handle loads of up to 100 tonne GCM, delivering equipment both locally and Australia-wide.

“Wherever there’s a need for equipment, we can get it there promptly and professionally,” Big Chief Heavy Haulage Manager, Lou Polidori, said.

“The Ivecos are normally coupled to either tri or quad axle low loaders with ‘dolly’ if required, it gives us the versatility to move a wide range of machinery and other high mass and over dimensional loads.”

Lou has been in the earthmoving and heavy haulage industry all of his working life and was appointed around three years ago to establish and grow Big Chief Heavy Haulage – despite the downturns in the mining and construction industries, it’s a task he’s been successful at.

“It’s been hard work but if you provide clients with the right service they’ll come back, I’ve also been fortunate to have developed a lot of trust in the industry over many years,” Lou said.

“One area that’s a big challenge is attracting quality drivers, but one way of doing this is giving them a comfortable and capable truck to drive.

“I’ve had drivers of North American trucks that just won’t go back there once they’ve driven the Stralis and Powerstar, they’re so much quieter, more comfortable and just nicer to drive overall.”

The Stralis AS-L features Iveco’s Cursor 13 engine developing 560 hp and 2,300 Nm of torque from a low 1,000 rpm and is matched to the 16-speed Eurotronic II automated transmission.

Despite some other operators opting for an American driveline in heavy haulage applications, Lou says that he is pleased with the performance of Iveco’s proprietary equipment.

“We’ve had no issues with the Ivecos, our oldest Stralis model has well over 500,000 kms on the clock and is still performing well,” Lou said.

“We expect to keep the trucks for about five years and see around 1,000,000 kilometres before they’re replaced.”

For buyers preferring an American driveline, Iveco with its Powerstar range is one of the few European manufactures offering models with this componentry, or with a combination of both American and European driveline parts, as is the case with Big Chief’s Powerstar which features Cummins engine coupled to the Eurotronic II automated manual transmission.

With the business performing well, Lou says additional trucks are currently under evaluation to join the fleet, including Iveco’s flagship Powerstar 7800 prime mover.

“We’ve taken a close look at the specifications and there’s definitely a place for one within the business, so we went ahead and placed the order – we’re really looking forward to its arrival.”