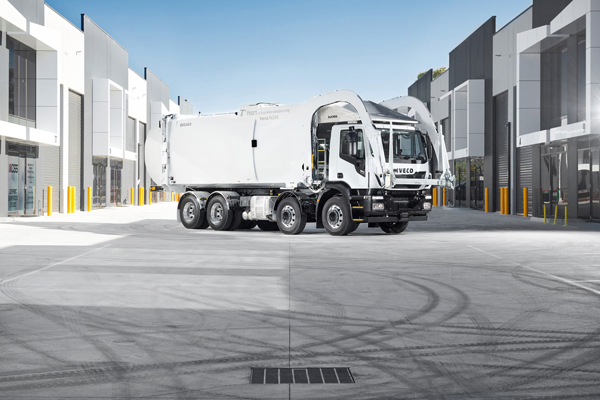 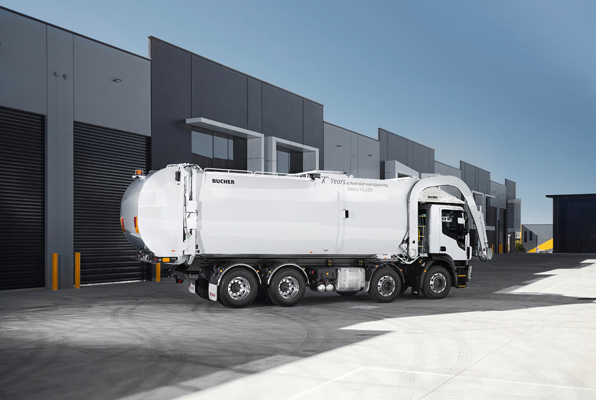 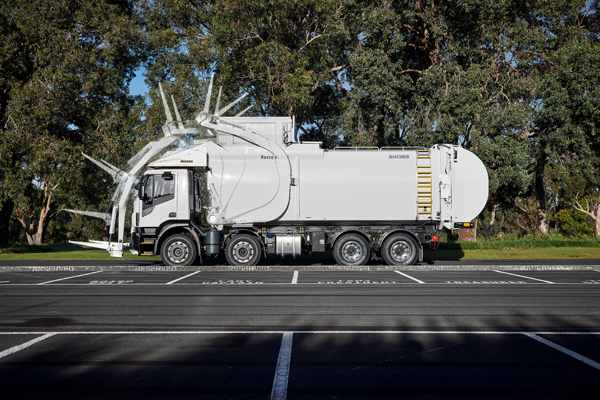 In November, leading supplier of refuse collection equipment, Bucher Municipal, celebrated 70 years as an Australian manufacturer and marked the occasion by developing several limited-edition compactor units, including five which have been built on 8x4 Euro6 ACCO platforms.

The new units feature 33m³ front-loading compactor bodies, adorned with subtle ’70 year’ commemorative livery, and will be used to exhibit at industry events before starting a working life on customer fleets.

According to Bucher Municipal Customer Support Manager, Daniel Sampson, given that Bucher Municipal (which in 2005 acquired MacDonald Johnston Engineering in Australia), had enjoyed a 50-year relationship with IVECO and previously INTERNATIONAL, it was only fitting that the ACCO cab chassis was selected for the front loader project.

“As a company we value our long-term suppliers and partnerships, and we’ve enjoyed a relationship with the ACCO model that spans approximately 50 years,” Daniel said.

“Aside from the nostalgia, we also needed to ensure that any vehicles that we developed for the occasion would be attractive to prospective customers once our anniversary celebrations were complete.

“The ACCO is well regarded throughout the waste collection industry and feedback on the latest Euro6 model is very positive, not only from the end users but from our own manufacturing team who enjoy working on the cab chassis during body fitment.”

The 8x4 Euro6 ACCOs that Bucher Municipal specified feature an efficient yet powerful 8.7 litre turbodiesel engine that produces 360hp and 1650Nm of torque from a low 1200rpm. Emission control is handled by IVECO’s unique Hi-SCR technology which features a single after treatment system with passive diesel particulate filter that doesn’t require regeneration downtime.

Suspension on these models comes courtesy of front two-leaf parabolic air (loadshare), while in the rear, the trucks feature IVECO 8-bag with ECAS (Electronically Controlled Air Suspension) for added comfort and adjustability.

Along with key performance parameters based around productivity and low emission output, another major consideration for Bucher Municipal in selecting the latest ACCO models was their safety features, according to Daniel.

“Every local government and the major waste contractors require trucks that meet Euro6 emission standards and also feature a high level of safety content,” he said.

Bucher Municipal has added to the safety equation by fitting a five-camera system to allow visibility around the entire truck, a roof safety harness for maintenance at height, and front zone detection technology which alerts the driver if there’s a pedestrian in the truck’s operating zone.

Daniel said that IVECO’s local modification capabilities as part of its Customisation & Innovation Centre, were another positive aspect of partnering with the brand.

“IVECO has the ability to make changes to the cab chassis platform to better suit the requirements of our bodies, this makes things easier for us and saves time in the body manufacturing process,” he said.

“We can request IVECO to change the position of fuel and air tanks, battery boxes and reroute exhausts – it’s all done consistently and arrives at our facility ready to go.”

All heavy-duty IVECO models now also include the company’s proprietary telematics as standard, providing the convenience of a factory-fitted telematics solution that delivers valuable insights for waste industry fleet managers from up to 70 data sources.

Look out for Bucher Municipal’s 70-year anniversary ACCO models at waste industry shows in the months ahead.